On January 7th, 2020, the Kioxia NAND Flash Plant located in Yokkaichi, Japan, experienced an equipment fire. The fire occurred in a cleanroom facility, in Fab 6. Although there were no casualties, the equipment was damaged, and the production facility has been shut down for inspection. According to the latest updates by Kioxia, this fire incident will cause a complete shutdown in production of 3D NAND flash memory for at least a two-week period of investigation, repairs, and recommissioning of the production line.

The Kioxia Fab in question, is jointly owned by Western Digital and Kioxia. Western Digital and Kioxia produce about 32% of the world’s total NAND flash memory, second only to Samsung in total worldwide NAND production. The production of NAND flash memory production has been growing in response to increasing demand by enterprise, client, and consumer applications. NAND flash is the primary storage type for many data center applications globally.

The Yokkaichi foundry experienced a production halt last year, due to a power outage. Although the power outage lasted only 13 minutes, it caused a disruption to throughput that resulted in a significant loss in worldwide NAND production capacity, that lasted several months. Kioxia Fab 6 produces 64-layer and 96-layer 3D NAND flash for Kioxia and Western Digital. Kioxia Fab 6 is estimated to supply nearly 4 percent of the total global NAND production.

The loss of Kioxia production capacity in Yokkaichi is expected to cause some price increases for 3D NAND flash in the short term. The disruption to global production capacity is anticipated to be temporary. New Chinese 3D NAND production is expected to be coming online later in the year, and NAND flash could see significant price reductions. In 2019, NAND prices increased significantly after flash demand began to catch up with a significant overproduction in 2018. Increased global production of these devices in early 2020, should stabilize pricing and supply inventories.

Although it is premature to assess the monetary loss to Kioxia, caused by damaged equipment and shut down of manufacturing for at least 2 weeks, industry experts expect this event to have a significant impact on short-term profitability. It is most fortunate that there was no injury to personnel, and that the production equipment fire did not spread to other areas of the facility, but it is a harsh example of how destructive fire can be in a cleanroom manufacturing environment.

It is our sincere goal at KFPI, to minimize the fire risk to cleanroom manufacturing, anywhere in the world. We cannot stress strongly enough how critical it is to design, install, certify, and maintain proper fire safety systems for process tools. The fire risk to personnel, equipment, and production capacity is enormous. Even the smallest of fires in semiconductor process equipment can be catastrophic. Please don’t take your fire safety for granted! If you have questions or concerns about the adequacy of your fire safety, please don’t hesitate to contact us at KFPI, to fully evaluate your tool fire protection and fire safety risks. We are always happy to do whatever we can to minimize your fire hazards and increase your fortunes! 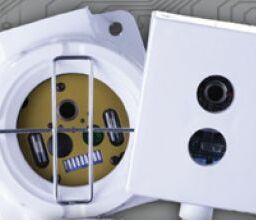