The ancient Greeks considered fire to be one of the major elements in the universe, in addition to water, earth, and air. In their world, fire was a fundamental principle of material existence – One can feel fire, as one can feel earth, water and air. One can also see, smell, and touch it, if one were daring enough. Fire was an element with which to shape the world around.

In our relatively-modern world, fire is something completely different than earth, water, and air. Earth, water and air are all forms of matter – their substance is of millions of atoms collected together. Fire is not made of matter at all. It is, instead, the effect of matter changing form in a fantastic and formerly mystical way, as old as our collective memories. It is one part of a chemical reaction.

Typically, fire comes from a chemical reaction between oxygen in the atmosphere and some sort of fuel – wood or gasoline, for example. Of course, wood and gasoline don’t simple catch on fire just because they’re surrounded by oxygen. For a combustion reaction to happen, you have to have an ignition source. An ignition source can be from things like lighting a match, a spark, a lightning strike, or just raising the fuel source to its ignition temperature. These three basic things make up the Fire Triangle : fuel, oxygen, and ignition.

Arguably, one of the most pondered questions throughout human history, is why wood burns. It is not magic, as you may have believed in the past. Here is the most common sequence of events in a typical wood fire: Something heats the wood to a very high temperature. When the temperature of the wood reaches about 150 degrees Celsius, the heat decomposes some of the cellulose material from which the wood is formed. Some of this decomposed material is released as volatile gases. (We call these gases “smoke”.) Wood smoke is comprised of various compounds of hydrogen, carbon, and oxygen. The remaining material forms char, which is nearly pure carbon, and ash – which is all of the unburnable minerals in the wood such as calcium, potassium, etc. When wood is burning, the wood is not actually burning, it is being heated until gases are released, and the gases are burning.

Why is Fire Bright?

As carbon atoms heat up, the rising atoms emit light. This effect of light created by heat, is called incandescence – and it is the same principle that creates light in a light bulb. This incandescence is what causes the visible flame of a wood fire. (Incandescence is not the same as luminescence. Luminescence is emission of light by a substance not resulting from heat. It is a cold-body radiation caused by things like chemical reactions, subatomic motions, or stress on crystals.) Flame color varies depending on what kind of fuel is burning and how hot it is. Color variation within a flame is caused by uneven temperature. Typically, the hottest part of a flame, the base, glows blue, and the cooler parts at the top glow orange or yellow.

When the volatile gases coming from heated wood are hot enough (about 500 degrees F / 260 degrees C) for wood), the compound molecules break apart, and the atoms recombine with oxygen to form water, carbon dioxide, and other byproducts. We refer to this as “burning”. Different fuels ignite and burn at different temperatures

Different flammable fuels catch fire at different temperatures. It takes a certain amount of heat energy to change any particular material into a gas, and even more heat energy to trigger the reaction with oxygen to produce fire. The necessary heat level varies depending on the nature of the molecules that make up the fuel type. The piloted ignition temperature of a fuel is the heat level required to form a gas that will then ignite when exposed to a spark. At the unpiloted ignition temperature, which is much higher, the fuel ignites without a spark.

In a Semiconductor Cleanroom – Fire Bad!

In the semiconductor manufacturing industry, there are many types of potential fuel sources for a fire. There are diverse process chemistries that all present differing fire risks and differing fire characteristics. Typically, in a semiconductor manufacturing operation, there are hydrocarbon-based fuel sources, Silane-based fuel sources, and Hydrogen-based fuel sources. All of these potential fuel types have different piloted and unpiloted ignition temperatures, different gaseous outputs during a fire, different light signatures when burning, and different extinguishing requirements. There are also many pyrophoric chemicals, such as metalorganics, in common use. These chemicals do not require an ignition source, other than exposure to oxygen.

Due to the high safety risk factor of semiconductor chemistries, and the large threat that fire poses to personnel life safety, potential equipment and facility damage, as well as potential production disruption, fire safety in semiconductor manufacturing should be left for experts to handle. 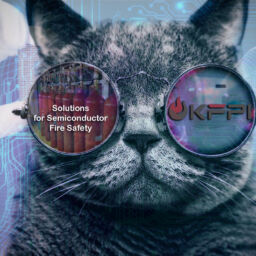 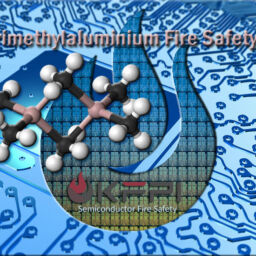